The tropical rainforest of Xishuangbanna has the most abundant and cryptic plant species biodiversity in China. To explore the populations of plant virus families in Xishuangbanna tropical rainforests, fifteen pools of plant samples from different forest locations were collected and used for small RNA analyses by high throughput sequencing. All contigs were classified and annotated with the NCBI Nt database to determine the species distributions, and comparisons were conducted using the Blast algorithm. The viral sequences in the Clean Reads were compared with the relevant sequences, using the Kraken software system, to infer their possible classification and to analyze the abundance of each species statistically. The number of Clean reads of every pool sample was from 1573897 to 26878598, and the average number of Clean reads was 20322116. The average number of clean reads is taken as 0.0036% from the average number of Raw reads. The results from a total of 3703 viral sequences were annotated, and these represented a total of 16 plant virus families. Among these, 1952 Geminiviridae sequences comprised the dominant annotated virus proportion. 732 sequences belonged to the Potyviridae, and 192 sequences were characteristic of members of the Caulimoviridae. The viral sequences primarily originated from dicots and monocotyledonous plants, including herbaceous and woody plants. Generally, the total viral sequences from herbaceous plants represented 66.7 %, and 33.3 % were from woody plants, and amongst these, 57.1% dicots represented the plant hosts, whereas 42.9 % were derived from monocotyledonous families. The presumptive Geminiviridae and Potyviridae viruses have broad host ranges, and different families were annotated from each sample site in Xishuangbanna. This study lays a foundation for future research on the evolution and utilization of viruses within tropical rainforests and those of cultivated agricultural areas. 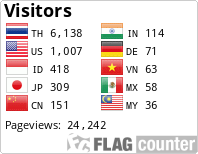 Copyright - Faculty of Science and Agricultural Technology
BACK TO TOP